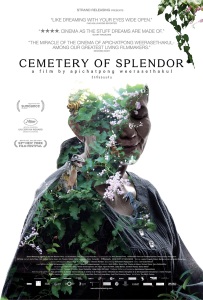 Cemetery of Splendor (Rak Ti Khon Kaen), a 2015 film written and directed by Apichatpong Weerasethakul, is, like the Thai director’s other works, mysterious, hypnotic, languorous in pace, and casually otherworldly. It won a fair amount of praise, with Cahiers du Cinema judging it the second best film of 2015, and Sight & Sound ranking it at number 5. If action and a straight-line narrative are what you’re after in a film, Weerasethakul’s works are probably not for you. But if you enjoy being immersed in world that resembles our own but is also strange, enigmatic, and suffused with magic, then Cemetery of Splendor is well worth investigating.

A long dark screen opens the film, into which industrial and jungle sounds gradually emerge. Heavy machinery is digging dirt while soldiers stand by. We suddenly cut to someone sleeping, his IV bag letting us know we’re in a medical setting. Many others sleep near him.

A mysterious sleeping sickness has stricken a group of soldiers. They have been transferred to a temporary clinic set up in a former school. Jenjira, or Jen (Jenjira Pongpas), a housewife who is volunteering at the clinic, attended school in the same building many years before. Her memories of growing up in that neighborhood take on a new life as she takes care of Itt (Banlop Lomnoi), one of the sleeping soldiers for whom she feels a mysterious attraction. Another volunteer, Keng (Jarinpattra Rueangram), is a medium who uses her powers to communicate with the sleeping men.

While Jen is applying lotion to Itt’s skin one day, he suddenly wakes up. They start to converse and get to know one another, and later make a couple of excursions. One is to a movie theater where, amusingly, we see the trailer for some sort of horror film, The Iron-Coffin Killer. Its drama, explosions, and weird creatures are much in contrast to the perfectly matter-of-fact way in which the supernatural manifests itself in Cemetery of Splendor. Just as amusingly, we subsequently move to the busy theater lobby, where in the distance we see Jen, followed by Itt who, suddenly asleep again, is being carried out of the theater by attendants. That scene cross-fades into a gorgeous shot of the special lamps that have been installed in the clinic; their lights gradually moving through a range of colors, therapeutically easing the men’s sleep.

At a local shrine, two female mannequins preside over small animal figures and other offerings. The two goddesses come to life – things like that happen in Weerasethakul’s world – and inform Jen that the clinic sits on the site of a very old cemetery, where ancient kings are laid to rest. Those kings are continuing their warfare in the afterlife, drawing on the energies of the sleeping soldiers to fight. 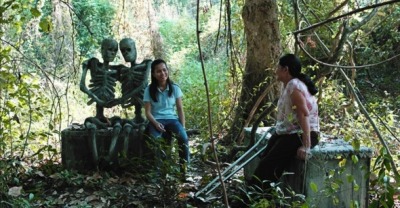 In one of my favorite scenes, the young psychic Keng takes the spirit of Itt within herself, and she escorts Jen through the world that Itt sees as he sleeps, the old temple and its grounds that used to be located there. And Jen simultaneously guides Itt/Keng through the present-day forest that she knows well from her youth. It was once a park, with sculptures now overgrown by the forest. Signs with brief sayings are scattered throughout – one reads, “Time left unused is the longest time.” Another says, “When we offend someone, we want to be forgiven. But when we are offended, we forget how to forgive.”

Jen has had to deal with her own medical issue, as one of her legs is ten centimeters shorter than the other; she wears a special shoe and needs to use crutches to get around. In one strange, sensual scene, Keng pours herbal water on Jen’s injured leg and, in what she calls “therapy,” licks it off, causing Jen to cry, overwhelmed with emotion.

Then suddenly we’re back in the clinic. Itt is in bed asleep, and Jen sleeps with her head next to him. Both awaken, and they each say that they can see one another’s dreams. Was everything we’d just seen a dream? We start to question whether Itt ever actually awakened; it could well be that much of what we’ve been witnessing happened only within Jen’s imagination. 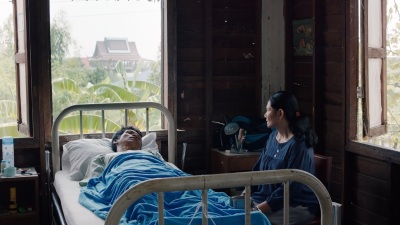 It seems reasonable to guess that the sleeping epidemic serves as a metaphor. But for what? Weerasethakul, or “Joe” as he is known to many, makes very personal films, but is also acutely aware of the political situation around him in Thailand. The concept of a sleeping sickness apparently derived from a true story of an outbreak of some disease that caused forty Thai soldiers to be quarantined. This happened about three years before Cemetery of Splendor was made, and coincided with a wave of political protests in the country. Thailand has had a turbulent recent history of coups, protests, and violence. There must be a connection between the soldiers, their sickness, and contemporary events – long-dead warriors who continue to sap the energies of today’s young men? As usual, however, Weerasethakul doesn’t spell it out.

Many of the elements that make up Weerasethakul’s filmic world recur in Cemetery of Splendor. Actors that appear here, like Jenjira Pongpas, are regulars in his films. There’s a densely wooded jungle setting, as in Tropical Malady and Uncle Boonmee Who Can Recall His Past Lives. The rural clinic recalls the hospital in Syndromes and a Century, where doctors once again play a central role, as they do in Blissfully Yours (both of Weerasethakul’s parents were physicians). Soldiers are also prominent players in Tropical Malady.

Weerasethakul has a fondness for long shots. He doesn’t like to get in the faces of his characters, but allows them space and their own inner lives within a larger setting. Unlike some of his other films, there are no otherworldly animals in Cemetery of Splendor, although a couple of goddesses make an appearance, and Weerasethakul admitted in an interview that a “monster” scene was cut from the film. All his films move so easily from dream to reality and back that it is often hard to distinguish between the two.

Cemetery of Splendor closes with a wonderfully mysterious scene: a group of people dance to some lighthearted pop music (one of the rare times that music appears in the film) while a voice-over talks in poetic terms about the majesty of the past. Some kids play soccer amid the mounds left by the construction crews outside the clinic while Jen looks on, wide eyed. Jen has obviously discovered something new about herself and her world. Her wide eyes may indicate fear, or a sense of wonder, or perhaps she is seeing something that we are not. We are left to resolve that, and so many other enigmas that populate this lovely, haunting film, for ourselves.

One thought on “Cemetery of Splendor”