“If you absolutely must … find an affiliation for me, put me with the Japanese of old: the refinement of their taste has always appealed to me, and I approve of the suggestions of their aesthetic, which evokes the presence by the shadow, the whole by the fragment.”

In this portion of an interview published in the June 1909 issue of the Gazette des beaux-arts, Claude Monet expresses his devotion to, and feeling of allegiance with, the art of Japan. Monet was hardly alone in his interest – among the many Western artists who came under the thrall of Japanese art in the late nineteenth and early twentieth centuries were Vincent van Gogh, Édouard Manet, Mary Cassatt, Camille Pissarro, Edgar Degas, Paul Gauguin, James McNeill Whistler, and Henri de Toulouse-Lautrec. Their interest, though, was not simply an attraction to the newness, the exoticism one might say, of Japan and its art. There was something deeper at work.

As Karin Breuer relates in her excellent Japanesque: The Japanese Print in the Era of Impressionism, the rise of a prosperous merchant class during the Tokugawa shogunate led to the development of an entertainment subculture that served them, a complex of art and entertainment that came to be known as the “floating world,” or ukiyo. The arts flourished during this time – calligraphy, music, poetry, the tea ceremony, and of course the famous woodblock prints, or ukiyo-e. These prints, which could be produced inexpensively and were designed for a mass audience, depicted famous actors, beautiful women, figures and events from Japanese history and mythology, familiar landscapes from around Japan, and so on. Print collections like Katsushika Hokusai’s Thirty-Six Views of Mount Fuji (c. 1830-32) and Utagawa Hiroshige’s series One Hundred Famous Views of Edo (1856–59) became vastly popular. 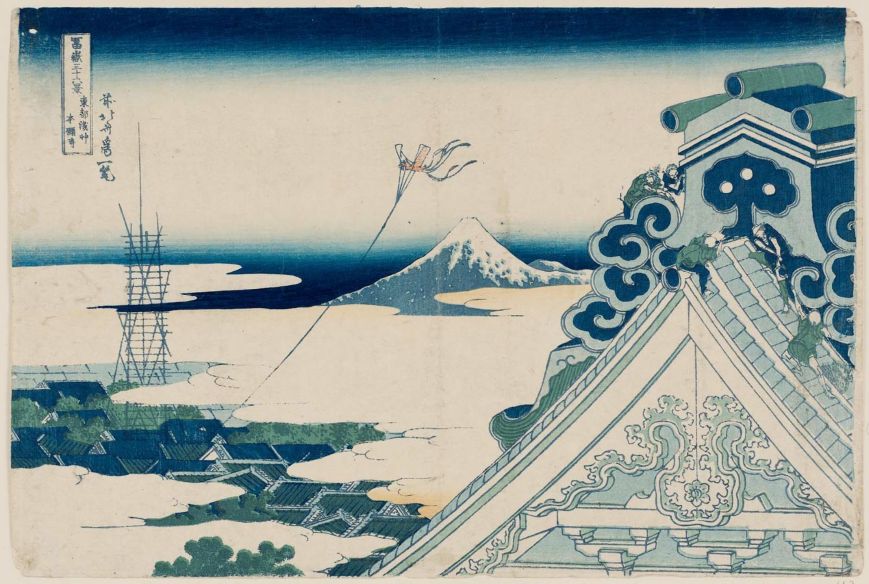 Katsushika Hokusai: Fuji from the Hongan Temple at Asakusa in Edo, from Thirty-Six Views of Mount Fuji (c. 1830-32)

By the 1860s, once Japanese ports were opened to foreign trade during the beginnings of the Meiji restoration, prints and other Japanese items like textiles, screens, and furniture started to become commonplace in Europe. And interest in them was almost immediate, especially in France. Societies and clubs were formed around the appreciation of Japanese art and culture – one formed in 1865 included Degas, Manet, Whistler, Charles Baudelaire, and Émile Zola as members. Critic Philippe Burty coined the word Japonisme in 1872 to describe the influence of Japanese art on the French. Soon Japanese prints were well-known throughout France. Major art dealers sold them by the hundreds, and books, articles, and exhibitions were dedicated to the subject.

Certain standard devices and themes found in Japanese prints were particularly attractive to Western artists. Among them were: an unusually low or high perspective, an original use of color, distinctive decorative patterns on clothing, asymmetrical compositions, strong diagonals, stylization, and the use of silhouettes in the background. Ross King, in his book Mad Enchantment: Claude Monet and the Painting of the Water Lilies (which I reviewed here), also points out that subject matter was another area in which the Impressionists and Japanese artists found common ground. “Hiroshige and his contemporaries depicted scenes of modern Japanese life in beautiful but modest surroundings: beside rivers, on bridges, in busy streets, during local festivals, and in teahouses or flowering lakeside gardens.” Monet and his fellow Impressionists, then, felt free to use as their subjects “the simple and analogous vistas in their own world: city streets, riversides, women’s fashions, sailboats, bridges, theaters, and opera houses.”

It’s not known for certain when Monet first encountered Japanese art. He once recalled that he bought a print he discovered by accident in a shop in Le Havre at a teenager in the mid 1850s, while another story says that the first encounter happened in 1871 in Amsterdam, when Monet bought a print he had found used as wrapping paper in a food shop. Critic Théodore Duret, one of the first French writers to take note of Japanese art, met Monet in 1873, an encounter that further fed Monet’s interest in Japan. Monet soon became an enthusiastic collector of Japanese art. His home eventually had on display some 230 woodblock prints. Hokusai was a favorite, and it may have been the latter’s many paintings of flowers that, in part at least, prompted Monet to focus so extensively on the water lilies in the garden at his home in Giverny.

Another part of the European interest in all things Japan was a craze for Japanese gardens. From around the 1890s, Japanese artists as well as Europeans were creating gardens in a Japanese style throughout the United Kingdom and elsewhere in Europe. It was in 1883 that Monet, Alice Hoschedé (who a few years later became his second wife), and their children settled in a farmhouse in Giverny, about fifty miles from Paris. Several years later, Monet started to renovate his garden there. With Japanese models in mind, he created a large pond, filled it with water lilies, and planted bamboo, willows, and other Japanese species around it. 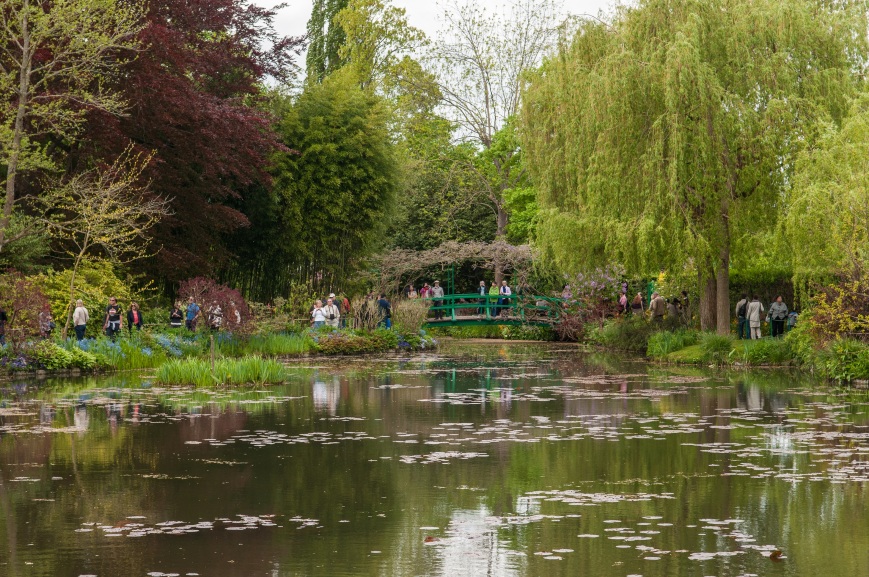 He also had built the now-famous wooden footbridge depicted in so many of his paintings.

Bridges were also a particular specialty for Utagawa Hiroshige, depicted numerous times in his series One Hundred Famous Views of Edo. One that clearly bears some resemblance to Monet’s work is Precincts of the Tenjin Shrine at Kameido.

Utagawa Hiroshige: Precincts of the Tenjin Shrine at Kameido, from One Hundred Famous Views of Edo (1856)

Another relevant work, this one by Hokusai, is Under the Mannen Bridge at Fukagawa. 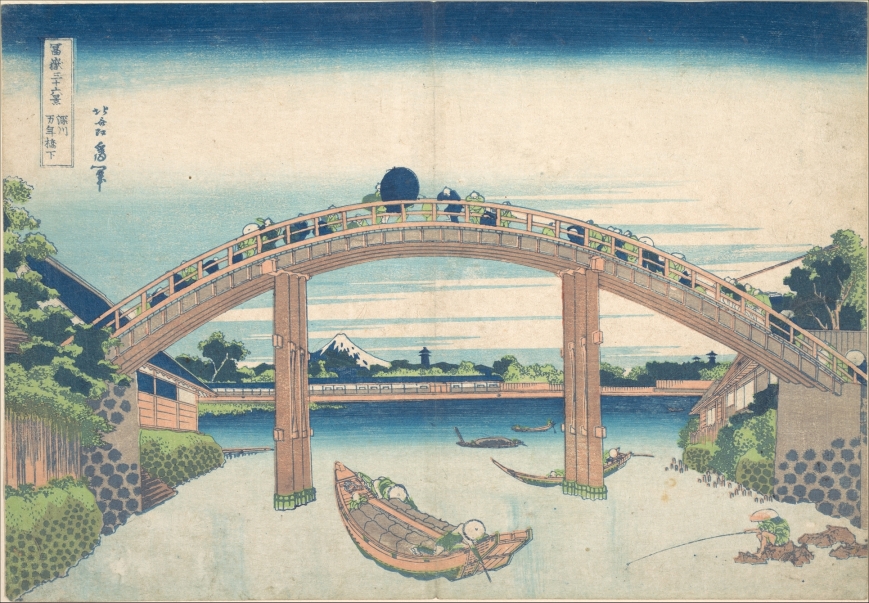 Katsushika Hokusai: Under the Mannen Bridge at Fukagawa, from Thirty-Six Views of Mount Fuji (1823)

One dramatic difference between Monet’s bridge and those depicted by the Japanese artists is the shape of the bridges themselves. The arch of Monet’s bridge is gentle, and the structure both attractive and practical, designed for easy walking and lingering. On the other hand, the bridges that both Hiroshige and Hokusai picture are quite high-arching, the shape almost semi-circular in the case of the Hiroshige. While Japanese artists were not averse to exaggerating some physical characteristics for the sake of a pleasing composition, bridges of the kind that Hiroshige and Hokusai depicted often served, at least in the minds of those that traversed them, as symbolic boundaries between the secular and sacred worlds, or even between the worlds of the living and the dead. One end of the bridge, for instance, might lead to a torii gate and the entrance to a shrine, or perhaps to a cemetery. Therefore, they are sometimes intentionally meant to be difficult to cross, and so have a significant ascent and descent.

Another theme common to both Monet and Hiroshige is snow. They both had a fascination with, and created many depictions of, snowy scenes. 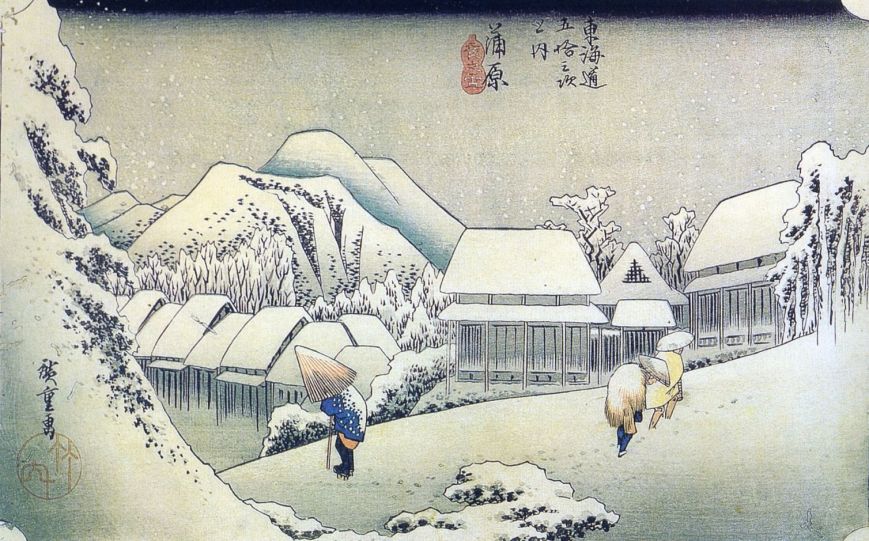 Utagawa Hiroshige: Evening Snow in Kanbara, from 53 Stations of Tokaido (1833)

Eliza E. Rathbone, curator of the exhibition Monet, Japonisme, and Effets de Neige, wrote of Monet’s snowscapes: “The Impressionists, and above all Monet, determined to record the complete spectrum: deep snow in brilliant sunshine, creating the bluest of blue shadows; snow under a low, gray winter sky that shrouds nature in a single tonality; landscapes so deep in snow that all details are obscured, evoking a silent world; even snow melting along a country road at sunset; or, perhaps most striking, a sky filled with snow falling.” One great example is A Cart on the Snowy Road at Honfleur.

A print by Hiroshige that might also be compared to Monet’s painting in terms of composition, especially in its lack of symmetry and use of perspective, is Evening View of Saruwaka Street.

The Monet painting most obviously influenced by the art of Japan is La Japonaise, or Madame Monet en costume japonais (1876), which Monet exhibited at the second group show of the Impressionists in 1876.

His first wife Camille-Leonix Doncieux, who had previously also modeled for Renoir, poses in an elaborate kimono, with a variety of fans (uchiwa, or paper fans) filling the background. It’s quite a large painting, 91.25” x 56”. The colors are brilliant. Camille’s skin, however, is very white, not unlike that of a geisha in Japanese prints, while her hair is painted as blonde, perhaps to emphasize her European identity. Although Monet himself was fascinated by Japanese art, it may well be that this particular painting was an ironic commentary on how much of a fad all things Japanese had become in Paris and throughout France. Monet ultimately regarded this painting as “trash.” It must be acknowledged, too, that there is a political, imperialist, some might even say racist element to this painting, and to the entire concept of Japonisme, as a controversy in 2015 at the Museum of Fine Arts in Boston reminds us.

Along with the thematic and technical alliances between the Impressionists and the Japanese woodblock print artists, there is something more fundamental in why Japonisme became so pervasive among European artists in the late nineteenth and early twentieth centuries. As was stated before, it was clearly not just the foreign, exotic quality of the work that appealed to Monet and these artists. Part of the modernist aesthetic was the seeking out of alternatives to the received techniques and styles that had dominated European art since the Renaissance (and before). Japanese artists like Hiroshige and Hokusai provided Monet and the rest with really attractive, rigorously-conceived alternatives that could easily be incorporated into their own very individual visions.