Yves Tanguy: From Green to White (1954)
[From The Metropolitan Museum of Art]

There is one to give bread to beggars,
One to scatter grain for the pigeons,
One to shed his blood in time of need,
Even one to sacrifice his life.

The healthy may lie down sick,
The traveler may encounter disaster.
A king may lose his country,
And find himself gathering firewood on the dune.

This world is mysterious, people are glorious,
In life people are their own pillars.
Just as there is water for the fire and embers for the winter,
So there is beauty for the journey.

A musical setting of this poem appears on Music of Central Asia Vol. 10: Borderlands

“The one and only test of a valid religious idea, doctrinal statement, spiritual experience, or devotional practice was that it must lead directly to practical compassion. If your understanding of the divine made you kinder, more empathetic, and impelled you to express this sympathy in concrete acts of loving-kindness, this was good theology. But if your notion of God made you unkind, belligerent, cruel, or self-righteous, or if it led you to kill in God’s name, it was bad theology. Compassion was the litmus test for the prophets of Israel, for the rabbis of the Talmud, for Jesus, for Paul, and for Muhammad, not to mention Confucius, Lao-tzu, the Buddha, or the sages of the Upanishads.” (Karen Armstrong, in The Spiral Staircase: My Climb Out of Darkness)

Click here to read the Charter for Compassion, initiated by Karen Armstrong and written by contributors from all over the world.

Good morning, all! It’s going to be a short Salon this week, as I have to head out to purchase myself a new laptop. My old IBM ThinkPad, which has done good service for years, has finally bitten the dust.

This has proved to be a productive week, as I finished two books and one review. John Dougill’s In Search of Japan’s Hidden Christians proved to be as interesting as I’d hoped. The review can be found here. Pursuing the subject of Christianity in Japan a little further, next up is Shusaku Endo’s novel Silence (I’ll also be taking another look at the 1971 film of the novel, directed by Masahiro Shinoda, right afterwards), as well as a compact disc set of music from the time of St. Francis Xavier, the Jesuit missionary who first brought Christianity to Japan as well as to many other areas in south and east Asia. Karen Armstrong’s The Spiral Staircase: My Climb Out of Darkness is also a very worthwhile read for those who are interested in her books, as she talks about her years in a convent, how she came to be a writer, and how she discovered compassion to be a major focus for her activities. 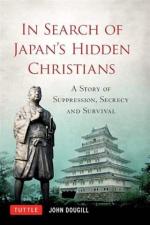 Missionaries brought Christianity to Japan in 1549. While it was initially greeted with suspicion, over time it attracted converts, and over the next sixty years some 300,000 people embraced the faith. But with popularity came a backlash, and in 1614 Christianity was banned in the country. Those who practiced it were persecuted, often with violence. For many, their faith had to become private as they became Kakure Kirishitan, or Hidden Christians. Their story is told by John Dougill, a professor of British Studies at Ryukoku University in Kyoto, in In Search of Japan’s Hidden Christians, subtitled “A Story of Suppression, Secrecy and Survival.” Each chapter of Dougill’s book is headed by a relevant religious title (Genesis, Commandments, Crucifixion, Apocalypse, etc.) as well as a place in Japan associated with the story that Dougill visits.

The first Europeans arrived in Japan by accident in 1543, two or three Portuguese traveling in a trade ship blown off course from China’s coast. Six years later, in 1549, Christianity arrived in the country with Francis Xavier, the “Apostle of the East,” one of the founding members of the Society of Jesus, or Jesuits. From his home base of Goa, on the west coast of India, Francis did missionary work all over south and east Asia. While in the Philippines he met Yajiro, an outlaw from Japan (where he had apparently committed a murder), who became the first official Japanese convert to Christianity, as well as Bernardo, another early convert and the first documented native of Japan to visit Europe. Both Yajiro and Bernardo accompanied Francis on his first trip to Japan. Dougill speculates that Xavier would have seen many similarities between his faith and the Shingon Buddhism he encountered: “the chanting, the robes, the incense, the prayer beads, the monasteries, the meditation, the one Supreme Deity.”

Francis’s first two years in Japan were a struggle, but eventually, in Yamaguchi, he was given permission to preach by the daimyo (the local ruler) and won hundreds of converts. Xavier wrote of that time, “I think I could truly say that in my life I have never received so much joy and spiritual satisfaction.” Much later, the site where he preached became the site of Japan’s first church. After thirty years of missionary work, by 1579 there were around 100,000 Christians in Japan. END_OF_DOCUMENT_TOKEN_TO_BE_REPLACED

Maria Kannon (Edo period, c. 1714). Found hidden inside a statue of Amida Buddha. Treasure of Kawaguchi City, Saitama Prefecture. Image from The A to Z Photo Dictionary of Japanese Sculpture & Art via This J-Site.

For most Japanese of this period of history, this statue would have depicted Kannon – otherwise known as Guanyin, or Kwannon, or, in male form, Avalokiteshvara, the Bodhisattva of infinite compassion. But for the Kakure Kirishitan, the Hidden Christians who were attempting secretly to preserve their banned faith in the face of persecution, exile, torture, and death, the statue would, in private, have represented the Virgin Mary and the child Jesus.

Welcome back to the Salon, and Happy June!

There wasn’t too much activity at my blog this week, aside from posting a painting by the Zen monk Hakuin (1686-1768), who wasn’t a trained artist but still created works with great character. I’m nearly done with John Dougill’s In Search of Japan’s Hidden Christians, which has turned out to be as interesting as I’d hoped. A review should be appearing soon. During off times I’m also reading, slowly, Karen Armstrong’s memoir The Spiral Staircase: My Climb Out Of Darkness. Being a fan of her books, I’ve long been interested in her story, especially her years as a nun and subsequent discovery of her vocation as a writer.

On another note, I was recently given the chance to contribute to My Audio Universe, a radio program and online magazine featuring readings of short stories culled from all over the world. My friend Brian Bahouth did a wonderful job on the production of “Cleaning Clothes in the Desert” by Benjamin Wolfe, which you can hear, read by yours truly, at the My Audio Universe website.

Returning to Japan for a moment, I was sad to read of the death a few days ago of filmmaker Kaneto Shindo at the age of 100. (Here is an obituary from the Guardian website.) Unfortunately I’ve only seen half a dozen of his nearly fifty films, but among these are some real favorites – especially Kuroneko (1968), a beautifully photographed and truly eerie ghost story recently released in a beautiful Blu-ray by the Criterion Collection, and Onibaba (1964), the completely strange story of two women who survive in a reedy swamp by killing passing samurai and selling their armor.

Knowing that Shindo had completed a film in 2010, Postcard, I was sort of hoping that he would join that small group of artists that has remained productive past the age of 100 – like filmmaker Manoel de Oliveira, who has apparently completed a new film at 102, or composer Elliott Carter, who at 103 is soon to have a new piece premiered. May we all have so many years of creativity!