Miguel Covarrubias (1904-57) – or, to give his entire name, José Miguel Covarrubias Duclaud – had a multi-faceted career as an artist, art historian, author, and ethnologist. His sketches and caricatures were for years a mainstay in The New Yorker and Vanity Fair, and his stage designs graced productions by the likes of Josephine Baker. Many of his books were inspired by his extensive travels. In his later years, researches into the art and culture of his native Mexico and larger Mesoamerica resulted in one of his most famous books, The Eagle, the Jaguar, and the Serpent: Indian Art of the Americas (1954).

With his then-girlfriend Rosa, Covarrubias visited Europe, Africa, and much of North and Central America in the 1920s. After their marriage in 1930, Miguel and Rosa took an extended honeymoon on the island of Bali. Fascinated by Balinese culture, they returned to the island in 1933 with the help of Miguel’s Guggenheim Fellowship.

His initial impression of Bali’s big cities was not favorable, but Covarrubias found its smaller villages fascinating. In the company of his friend Walter Spies – the native of Germany who became one of the West’s first experts on Balinese life, music, and the island’s flora and fauna – Covarrubias further explored Bali and, on returning in 1933, started assembling what he described as “all that could be obtained from personal experience by an unscientific artist, of a living culture that is doomed to disappear under the merciless onslaught of modern commercialism and standardization.” 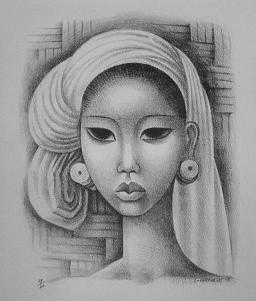 In 1937 Miguel Covarrubias published his seminal book Island of Bali, supplemented by many of his sketches and Rosa’s photographs. Inspired by the spectacular exhibition Bali: Art, Ritual, Performance that recently closed at San Francisco’s Asian Art Museum, I finally read Island of Bali, which remains one of the most important and detailed examinations of Bali’s art, culture, religion, economy, and geography.

Dominated by Gunung Agung, its highest mountain at just over 10,500 feet and one of its most sacred locations, Bali is largely humid and fertile, with some arid and less inhabited areas on its western side. Never much interested in sea exploration and trade, the Balinese did become great agriculturalists, especially with rice. The most important food on Bali, rice is said to have been the result of the Hindu god Vishnu raping Mother Earth; Dewi Sri, Vishnu’s wife, became the goddess of agriculture, and she is Bali’s most popular deity, frequently depicted in Balinese art.

Outside of the biggest cities, larger villages are divided up into bandjar or cooperative communities. Very distinct low (Malayo-Polynesian) and high (Sanskrit-Javanese) languages are spoken, depending on the caste of the interlocutor, with a compromise middle language if the rank isn’t known. Even when this book was written, tourists had become a fixture on Bali, as they are to an even greater extent today. In Covarrubias’s words, “The Balinese will be, to the tourists, guides, chauffeurs, and bellboys to be tipped, dancers on salary, curio-dealers, and tropical beauties to be photographed blouseless for a fee.”

Covarrubias briefly outlines Bali’s centuries-long domination by its neighbor Java. When in the early sixteenth century Java fell to Muslim invaders, there was a great exodus of priests, artists and intellectuals from Java to Bali, where Hindu-Javanese culture was preserved. Then the Dutch arrived in 1597, and soon thereafter the Dutch East India Company came to dominate local trade for two centuries. The Company withdrew from the island in 1798 but Dutch influence remained, and fighting between the Balinese and the Dutch continued into the twentieth century.

In Island of Bali Covarrubias describes a way of life that apparently hasn’t yet quite disappeared from the island, despite the onslaught of tourism and ever-increasing contact with the modern world. “It is plain that the refined and sensitive Balinese make the most of their daily routine, leading a harmonious and exciting, although simple existence, making an art of the elemental necessities of daily life – dress, food, and shelter.”

Rituals centered on personal landmarks (first menstruation, the famous filing of the teeth at puberty, romantic and sexual relations, marriages) and village life (planting and harvesting, ancestor worship) dominated Balinese cultural life. There was and is an abundance of artistic activity all over the island: music, dancing, painting, sculpture, poetry, storytelling, acting, weaving, and creation of complex offerings for the gods. Much of the poetry and drama is based on the classics Ramayana and Mahabharata, which were brought to Bali from Java as Hindu religious teachings (but with additional characters and situations added by the Balinese to act as comic relief). Most Balinese art is anonymous and collective: “The artist is in Bali essentially a craftsman and at the same time an amateur, casual and anonymous, who uses his talent knowing that no one will care to record his name for posterity.”

Covarrubias, happily, devotes a chapter to Balinese gamelan music. “No feast is complete in Bali without music and elaborate dramatic and dance performances,” he tells us. Every village and neighborhood has one or more gamelan ensembles, in which they take great pride. Unlike Colin McPhee’s fascinating but complex and detailed classic Music in Bali, Covarrubias’s descriptions are relatively non-technical: “In a general way, a Balinese composition is divided into four parts: a light solo to introduce the piece (geginaman); an introductory theme (pengunkab); a central motif (pengawak), the ‘body’ of the piece; and a rhapsodical finale in which the motives are developed (pengetjet).” He talks briefly about the many styles of gamelan, including the virtuosic kebyar, perhaps the most famous, as well as the pelelangan (which accompanies the legong, a dance specialized in by young girls), the portable angklung, and the gender wayang of the beloved shadow puppet theater called wayang kulit – “the medium of their classical poetry, for their ribald humour; and, most important of all … the greatest factor in the spiritual education of the masses.”

A significant portion of Island of Bali deals with Balinese religion. While most of Indonesia converted to Islam over the centuries, Bali maintained its native religious beliefs, a combination of Hinduism with elements of Buddhism and animism, with influences from India and China as well as Java. Temples, found all over Bali, are the center of religious life, used only for ceremonies and meetings. The Balinese pantheon of gods, the dewas, includes ancestors, community founders, and various Hindu deities, of whom the most important is Siva, who generates all life and has united in him both male and female principles. The pedanda, or high priest, officiates at most important ceremonies, preserves the knowledge of Sanskrit and holy texts, and is the masters of the complex multiple calendars of the Balinese.

As Covarrubias relates, “Strange as it seems, it is in their cremation ceremonies that the Balinese have their greatest fun. A cremation is an occasion for gaiety and not for mourning, since it represents the accomplishment of their most sacred duty: the ceremonial burning of the corpses of the dead to liberate their souls so that they can thus attain the higher worlds and be free for reincarnation into better beings.” Huge multi-leveled towers – representing the cosmos, with sections dedicated to the underworld, the world with its mountains and forests, and the heavens – are built to transport the corpse to the cremation ground. The corpse is placed in a cow carved from a tree trunk, and everything is burned. People save throughout their lives to pay for these expensive ceremonies.

Some of the information in Island of Bali is no doubt dated, although many of the life ways, customs, and rituals still very much survive on parts of the island. Clearly, however, the work has withstood the test of time, and remains one of the most often-referenced works on the subject of Bali. With his artist’s eye, his years spent on the island, and his obvious enthusiasm for his subject, Covarrubias has provided us a book that is rich in fascinating detail. Island of Bali remains one of the most valuable introductions to its subject.