One of a series of beautifully illustrated books that includes The Infinity of Lists, History of Beauty, and On Ugliness, Umberto Eco’s The Book of Legendary Lands examines imagined utopias and dystopias from fiction, antiquity, folklore, and religion – entire worlds, continents, cities, or even dwellings that might be entirely fictional, or re-imaginings of existing places, but which, in Eco’s words, “have created flows of belief.”

Utopia, or non-place, has sometimes been interpreted as eu-topia, or good place. Thomas More was only one of the most famous of the many who imagined such a society. For instance, a concept found throughout human history is the Earthly Paradise: usually, according to Eco, “where at the beginning of the world one lived in a state of bliss and innocence,” was cast out, but may one day return. One finds it in literally all the major world religions, whether it’s the Garden of Eden, Mount Meru, the Kunlun Mountains, or the Elysian Fields. 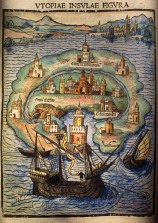 Very often it lives in the imagination, but for many thinkers and religions it has been an earthly (but distant) place: Sri Lanka, perhaps, or remotest Africa, or Armenia or Palestine, or an island in the middle of the ocean, or the top of the world’s highest peak. Perhaps it is the Isle of the Blessed that was written about so much during the Middle Ages and Renaissance (many, like St. Brendan, found it in close proximity to Ireland).

Perhaps, too, Atlantis was such a place. Atlantis, the continent that disappeared into the sea after catastrophic earthquakes or a flood, is the prototypical legendary land. Plato’s mentions of it in a couple of his dialogues (in the Critias, Atlantis is an island where live the descendants of the god Poseidon and his mortal lover Cleito) are the earliest that still exist, although there is evidence that the idea went much farther back. Centuries after Plato, Roman writers like Pliny the Elder and Diodorus Siculus returned to the concept. There was a renewal of interest during the Renaissance as well, where America, and later, Scandinavia were identified with Atlantis (although how these still-existing places could be Atlantis if Atlantis was destroyed and fell into the sea wasn’t explained). Another period of interest was the late nineteenth century.

Think of the appearance of Atlantis in Jules Verne’s Twenty Thousand Leagues Under the Sea (1870):

“…there beneath my eyes was a town in ruins, demolished, overwhelmed, laid low, its roofs caved in, its temples pulled down, its arches dislocated, its columns stretching over the earth; in these ruins you could still detect the solid proportions of a sort of Tuscan architecture; farther off, the remains of a gigantic aqueduct,; here, the caked heights of an acropolis along with the fluid forms of a Parthenon; there, the remnants of a wharf, as if some bygone part had long ago harbored merchant vessels and triple-tiered war galleys on the shores of some lost ocean; still farther off, long rows of collapsing walls, deserted thoroughfares, a whole Pompeii buried under the waters, which Captain Nemo had resurrected before my eyes!”

Humankind seems to have an intense need to concretize its myths, to place legendary figures and events in an actual, recognizable time and setting. The spiritual, or one might say human, truths to be found in these stories only come to life, for some at least, if they’re given some historical actuality.

Eco provides us many examples of this – ancient Greece, for instance, where, as Eco points out, “the Greek imagination continuously transformed every aspect of the world in knew into a legendary place.” For instance, over the centuries many have attempted to chart the journey of Odysseus in The Odyssey, relating those places with modern locations (the island of Circe as Mount Circeo in Lazio, or the straits of Messina as the location of Scylla and Charybdis). There have, however, been some more fanciful reconstructions – for instance, Hans Steuerwald located the travels of Odysseus in the British Isles around Cornwall and Scotland, Felice Vinci found him in the Baltic and Scandinavia, Hubert Daunicht suggested that he reached China and Japan, and the late nineteenth century pseudo-Eumaios believed that Odysseus discovered America!

One also mustn’t forget the two legendary places associated with the equally legendary Holy Grail: Camelot, King Arthur’s castle, with its Round Table, and Avalon, where the Grail was kept after it was delivered there by Joseph of Arimathea. Avalon is often today identified with Glastonbury, where in the twelfth century a stone was discovered with Latin words carved into it: “Here lies buried the famous King Arthur, with his second wife, Guinevere, on the island of Avalon.” Camelot has been placed by storytellers as far afield as Wales and Galicia. After flourishing in medieval times, the stories of King Arthur, the Knights and the Grail were largely abandoned for hundreds of years before a major revival during the Romantic era, when nineteenth century poets and thinkers brought to the stories all sorts of new, often occult, interpretations.

The legend of Prester John (prester being an old version of the word priest) started in the twelfth century when this supposed descendant of the Magi and ruler of a land to the east of the easternmost Muslims urged Popes Eugene III and Alexander III to embark on a second crusade. John was of course a myth, and the famous letter he wrote a forgery (quoted in Eco’s book, this curious, self-adulating letter is a virtual compendium of descriptions of the miraculous lands and creatures – centaurs, forty-foot-tall women, flesh-eating men, gem-producing streams, and more – described throughout his book). But the legend of John and his eastern kingdom lived on for centuries. As Eco justly reminds us, “when individuals or entire groups cling fideistically to some untenable idea, not even the evident failure of their theories will persuade them to change their minds.”

Of course the unknown worlds needn’t just be on the surface of the earth. Many cultures believed that Hell, and the condemned dead, could be found in the bowels of the earth, the underworld. Humankind has had an ongoing fascination with caves, mines, catacombs, buried treasure, and so on, not to mention the gnomes and trolls and monsters that reside there.

Eco explores some of these many fictional subterranean worlds, such as those invented by Ludvig Holberg in Niels Klim’s Journey Under the Ground (1741) and the better-known A Journey to the Center of the Earth (1864) by Jules Verne. These underground worlds, accessible via openings at the North and South Poles, often had their own suns, oceans, bestiaries, and human races (survivors of the destruction of Atlantis in one account). Some have even speculated that we ourselves live in a subterranean world, and just don’t know it.

Some of these imaginary places appeared on maps and in the written accounts of travelers for centuries, until they were found not to exist by others who, while searching for them, found entirely other places. New Guinea and the Philippines, for instance, were “discovered” by Spanish explorers looking for the Terra Australis, or Austral Land, a supposedly huge continent to be found in the southern hemisphere. Some of these discoveries were accidental, due to the fact that the accurate recording of longitude had to wait until the eighteenth century and the invention of the marine chronometer.

More fanciful propositions for recording longitude, like tides or the locations of the satellites of Jupiter (proposed by Galileo) or the application of “sympathetic powder” to open wounds, led many astray. Oddly enough, there are still islands, Eco tells us, that have never actually been found that to this day appear on authoritative maps by the likes of National Geographic.

Eco has always loved to explore obscure legends and occult mysteries like these; his 1988 novel Foucault’s Pendulum, for instance, is a bewildering, fascinating mash-up of dozens of these. In The Book of Legendary Lands Eco ranges across human history and geography for his examples. All manner of fabulous, magical illustrations are included in the book, and at the end of each chapter are extensive quotations from the works and writers Eco cites – in fact, one might regard the book as a compendium or anthology of information on the lands Eco describes. 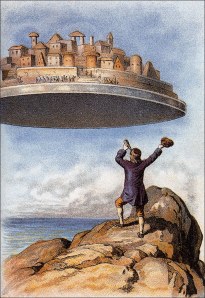 All the art works featured above appear in The Book of Legendary Lands. From top:
– Woodcut map of the island of Utopia on frontispiece of the first edition of Thomas More’s Utopia (1516)
– J. Augustus Knapp, An Idealistic Depiction of the Atlantean Mystery Temple, illustration from Manly P. Hall, The Secret Teachings of All Ages (1928)
– School of Giulio Romano, Olympus Over a Water Labyrinth (sixteenth century)
– The Holy Grail appears to the Knights of the Round Table, from the Livre de Messire Lancelot du Lac (fifteenth century)
– Monsters, from Konrad von Megenberg, The Book of Nature (1482)
– Nicolo dell’Abate, Aeneas Descending into Lake Avernus (sixteenth century)
– Creatures of the Subterranean World, from Ludvig Holberg, Niels Klim’s Journey Under the Ground (1767 ed.)
– Anonymous, Jasconius Mistaken for an Island (1621)
– Gulliver discovers Laputa, illustration from an edition of Gulliver’s Travels by Jonathan Swift (Leipzig, c. 1910)