The Mission San Carlos Borroméo del río Carmelo, more commonly known as the Carmel Mission, is only the second of California’s twenty-one missions that I’ve visited, and the first I’ve really had the opportunity to explore for any length of time. It is on the National Register of Historic Places, and has been designated a National Historic Landmark by the National Park Service.

The Carmel Mission was one of nine founded by Father Junípero Serra. Nicknamed the “missionary of the cross,” Serra was born in 1713 on Majorca, off the coast of Spain. He entered the Franciscan order just before he turned seventeen. After earning a doctorate in theology, he taught at the Lullian University in Majorca until 1749, at which point he turned to missionary work and headed to Mexico. 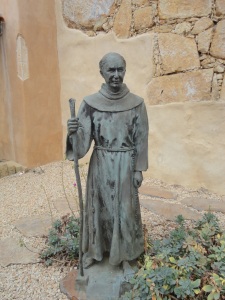 He became Presidente of the Sierra Gorda Missions in 1751, then worked at San Fernando College starting in 1758. In 1767, King Carlos III of Spain expelled the Jesuits from all Spanish colonies. All the missions in Baja California became Franciscan, and Serra was named Presidente of the Missions of Lower and Upper (Alta) California. The next year, Serra accompanied Don Gaspar de Portolá in an expedition to colonize more of what is now the state of California.

Serra established the first Alta California mission in San Diego in July 1769. Then in June 1770 he founded the Mission San Carlos Borroméo, named after the sixteenth century Italian Saint Carlo Borromeo – Carlos Borroméo in Spanish – Archbishop of Milan and patron saint of Carlos III. Mission San Carlos Borroméo was originally located in Monterey. But Serra was not pleased with the treatment that the local Native Americans were getting from the Spanish soldiers headquartered at the Monterey Presidio (fort). So the Mission was moved to a new location in the Carmel Valley near the Carmel River in 1771. The Carmel Mission became Serra’s favorite, and served as headquarters of the Alta California missions for the remainder of his life and beyond.

The Missions served to extend Spain’s influence, and to convert the area’s natives to Christianity. Those Native Americans, from a number of tribes including the Ohlone and Esselen, did much of the construction work for the early Mission buildings. They also took on the tasks of farming as well as becoming blacksmiths, weavers, tanners, carpenters, and more. More than 4,000 natives were baptized between the Carmel Mission’s founding and 1836. Initially, the farming near the Mission was not successful, and those who lived there were dependent on supply ships. Over time that changed, and by 1783 the Carmel Mission produced enough food to support some 700 people.

Father Juan Crespí, co-founder of the Carmel Mission, died there in 1782 and was buried in what was then the Mission’s adobe church. Father Serra passed away two years later, and was buried next to Crespí. Father Fermín Lasuén of the San Diego Mission was elected to replace Serra as the new Presidente of the California Missions. Lasuén supervised the establishment of nine further missions before his death in 1803. He is now likewise buried at the Carmel Mission, adjacent to Serra and Crespí. 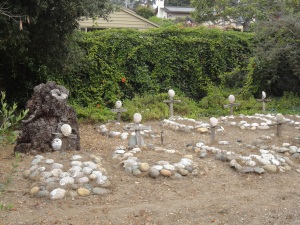 Another section of the Mission’s cemetery is dedicated to unnamed graves marked by abalone shells, representing the hundreds of indigenous people who died at and near the Mission. Their population, which shrank consistently after hitting a high of 927 in 1794, could never be sustained due to the smallpox, tuberculosis, and other European diseases that had been introduced. It must be said, too, that many of those natives were forcibly relocated by the Spanish and, poorly fed, subjected to violence, and sometimes even tortured, made to work – a book that I am currently reading on California history doesn’t hesitate to use the word “genocide” in reference to how the native population was treated.

It was Father Lasuén that initiated construction of the Carmel Mission’s stone church, California’s first, in 1793, using sandstone from the nearby Santa Lucia Mountains. Mortar was derived from seashells collected nearby. One of the most dramatic features of the church’s exterior is the unique star window just above the entrance. At the sides of the building are two dissimilar, asymmetrical bell towers, one with a Moorish-style dome (that dome may be the only remaining original at all the twenty-one Missions). The larger tower holds nine bells, most of which are also original. 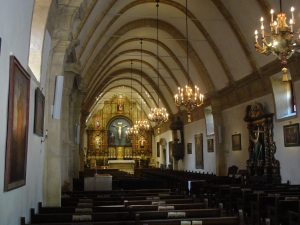 The ceiling of the new church had walls that curve inward as they rise, forming a catenary arch with its gradual, natural curve. That original ceiling collapsed in 1852, but was rebuilt several decades later in the same style. The walls are over five feet thick, and the beautiful, intricate reredos, or decorated wall behind the altar, extends to fully thirty feet. A variety of art works line the side walls. In 1986, then-pastor Monsignor Eamon MacMahon acquired a Casavant Frères organ. Its hand-painted casework is decorated with elaborate carvings and statues.

The mission was secularized, and turned into a simple parish church, by the newly independent Mexican government in August 1833. Mission lands were supposed to be distributed among the neophytes (converted Native Americans), but in fact they were mostly claimed by rich merchants and government officials. Actual worship in the region moved to Monterey, and the Carmel Mission fell into disrepair.

A handful of writers generated interest in the Missions and their restoration later in the nineteenth century, most prominently Robert Louis Stevenson, who visited the Carmel Mission in 1879 and wrote about it in one of his travel memoirs, Across the Plains: “As an antiquity in this new land, a quaint specimen of missionary architecture, and a memorial of good deeds, it had a triple claim to preservation from all thinking people, but neglect and abuse have been its portion.”

In the early 1880s, Father Angelo Casanova started to raise money to restore the stone church at Carmel. The church was rededicated in 1884. In 1924, artist Joseph Jacínto “Jo” Mora created the beautiful bronze and travertine marble cenotaph for Serra that depicts him and three other missionaries. Many of Serra’s belongings and other mementos are on display nearby.

Reconstruction of the Mission really took off in 1931, when a cabinet maker, Henry John (“Harry”) Downie, visited Carmel and was asked to repair some stone statues. He ended up spending the rest of his life there, working to restore the Carmel and other missions for some fifty years. In 1939, Downie discovered where Serra had placed the first permanent cross at the Mission. The large wooden cross in the courtyard is now at that spot.

Downie was dedicated to reconstructing the Carmel Mission in historically accurate style, and it is now regarded as the most authentically restored of all the California Missions. Its grounds house five museums documenting the Mission’s history, renovation, and art works. The depictions of Father Serra found all around the Mission are speculative, however, as he never actually posed for a portrait. Rooms within the Mission, including the “grand sala,” a typical monk’s cell, and Serra’s own room, have been set up to evoke what daily life might have been like there.

California’s “first library,” also housed at the Carmel Mission, included volumes from Mexico City’s San Fernando Apostolic College as well as missions in Mexico and lower California. The library held about fifty books at the time of Serra’s death, and 302 volumes when it was first cataloged in 1800. The books were disbursed over the years, but 229 of them were recovered in 1949 and are now on display. Also memorialized at the Mission is the library of the first California college, the Fatherhood of St. Joseph, founded by William Hartnell near Salinas in 1834.

In 1933, the Mission was made an independent parish, and in 1961 it was designated a Minor Basilica by Pope John XXIII. Today, the Carmel Mission is an active parish church, with the Junípero Serra Elementary School now adjacent to it. Pope John Paul II visited there in 1987 as part of a U.S. tour, praying in front of a statue of Our Lady Of Bethlehem, the shrine of which contains wood from Father Serra’s original casket. The following year, Pope John Paul II beatified Father Serra, and Pope Francis canonized him on September 23, 2015.

With the beauty of its buildings and grounds, its extensive and complex history, and its contemplative atmosphere, the Carmel Mission is a wonderful place to visit.