Time: 6:30 a.m. Sunday, right after my morning walk (I should have jogged this morning, but couldn’t make myself do it).

Place: At my laptop computer in the living room. In my ongoing series of computer problems, my recently-purchased desktop computer seems to have gone on strike. Repairs later this week.

Reading: Since I last visited the Salon, I finished A Man of Parts by David Lodge. I am now about 75% through Timothy Brook’s Mr. Selden’s Map of China. The same author’s unusually interesting Vermeer’s Hat used the context of items found in the paintings of Johannes Vermeer to examine just how global trade had become by the seventeenth century. Mr. Selden’s Map of China does much the same, this time using as a starting point an unusual seventeenth century map of the sea trade routes around China. I have also purchased The Mindful Way Workbook, which I am going to start on today and which I hope, in conjunction with the workshop mentioned below, will help me address some of the difficulties I’ve been having recently.

Viewing: Turner Classic Movies was kind enough to present an evening of films featuring prototypical movie tough guy Lawrence Tierney earlier this week. My favorite was one I’d never heard of before, Born to Kill (1947), an early film noir and tough little examination of anger and jealousy, directed by Robert Wise and featuring Claire Trevor and Elisha Cook Jr. Last night, I watched for the second time, and once again very much liked, The Mill and the Cross (2011), Lech Majewski’s film inspired by Pieter Bruegel the Elder’s work, particularly the painting The Procession to Calvary. Despite the film’s rather static pace, its imagery, a mix of live action and scenes from Bruegel, remains stunning.

Listening: John Luther Adams’s percussion work Inuksuit got my attention this week. Designed for outdoor performance, and recorded by Canteloupe Music in the woods of Vermont, this incredibly dynamic, immersive work (especially in the surround sound mix included with the CD) leaves pretty much every other percussion-centered work I’ve encountered in the shade. I’ll be writing more about this piece soon, I hope. Surround sound also led me to listen to the recent fortieth anniversary remastering of King Crimson’s classic Larks’ Tongues in Aspic, which sounded quite amazing in Steven Wilson’s surround mix. The set also included some video, including the Crim in full improvisation mode, that lets us see that mercurial percussionist Jamie Muir in action. It’s a shame that this particular Crim lineup only made this one studio recording.

Blogging: None this week, other than last Sunday’s posting of another short piece of music by yours truly. But I am continuing to work on a long-discussed piece on Chinese calligraphy that, if I’m good, will appear this week. If I’m not good, maybe it will be next week. I was interested to note that my recent blog post on “The Hungry Ghosts” was picked up by the Paranormal Encounters blog.

Pondering: Too much of my time the last few days has been dominated by my now-missing wisdom teeth, three of which were pulled on Tuesday. Unfortunately the pain and swelling, while diminished somewhat, haven’t yet gone away. But they have made it hard to be productive in any way. And this week’s restricted eating may have put me off of yogurt and mashed potatoes permanently.

Anticipating: My friend Julie was kind enough to alert me to a workshop, “Curbing Cravings: The Mindful Way Towards Creating Positive Habits,” that is starting this week in Reno. She and I are both signed up. I’m hoping that this, in tandem with the book mentioned above, will help relieve me of the repetitive patterns of negative thinking that have so plagued me.

Gratuitous Photograph of the Week: In honor of John Luther Adams, some of the inuksuit, or stone sentinels built by the Inuit people, at Inuksuk Point (Inuksugalait) on Baffin Island, Canada. Photo by Ansgar Walk. 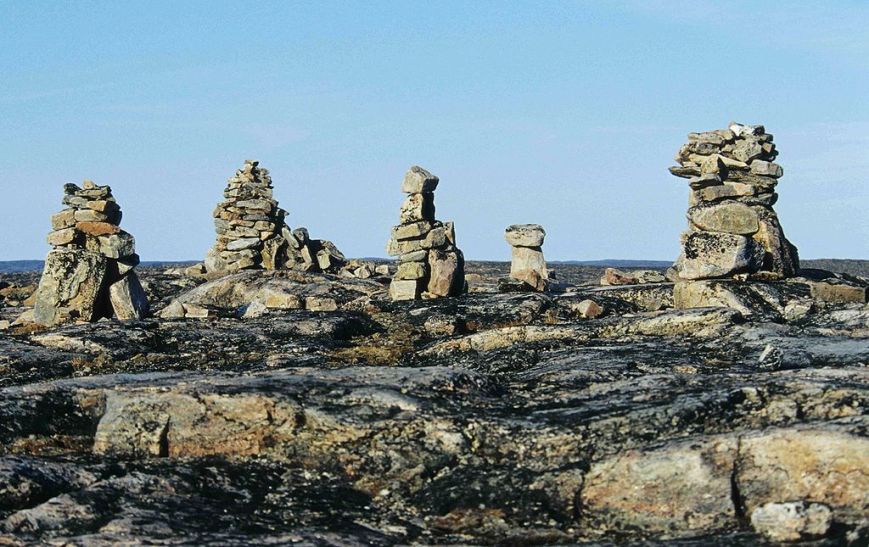