In around half an hour I will be heading out to the Angkor National Museum for a visit. Before that, however, I want to recount the events of yesterday afternoon.

We started at one of the gates of Angkor Thom, the great (3 km by 3 km) city of King Jayavarman VII.

At the center of Angkor Thom is the Bayon, the state temple for Jayavarman’s Mahayana Buddhist faith.

Compared to the immensity of Angkor Wat, the Bayon is quite small. Yet R, our guide, finds the Bayon to be his favorite of the Angkor sites, largely because of the 200-plus smiling faces – of Avalokiteshvara, the great Boddhisattva of infinite compassion, and Jayavarman VII simultaneously – on each of the four faces of the 54 temples, each representing one of the regions of Jayavarman’s kingdom. Those faces smile down on you from every direction. 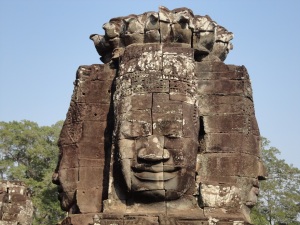 The remarkable bas reliefs, in much greater relief than those at Angkor Wat, provide a portrait of daily life at the time. Scenes range from fishing to childbirth to cockfighting to a huge naval battle, presumably against the Cham from south Vietnam that took over Angkor briefly from 1177 to 1181. 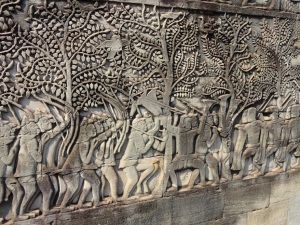 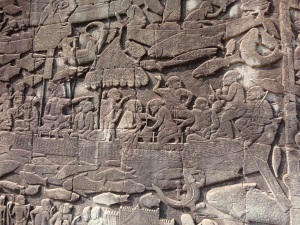 A complex maze of temples, one can see why the Bayon would be a favorite. 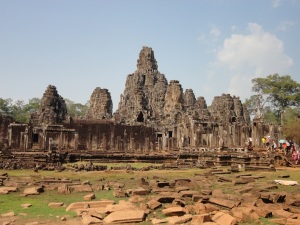 We drove past the Elephants Terrace and saw briefly the large, detailed bas reliefs of the elephants. Then we moved on to Ta Prohm, made famous in Lara Croft: Tomb Raider – which I’ve never seen, but which brought Angelina Jolie great fame in Cambodia (she has become widely known for her charitable works here, and was apparently even made an honorary citizen of Cambodia). Ta Prohm served as a monastery, where over 10,000 lived, served by tens of thousands of others. 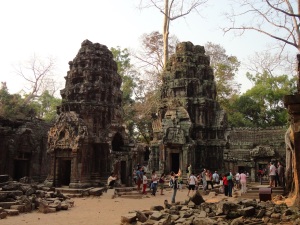 Dedicated to Jayavarman VII’s mother, Ta Prohm has been restored in parts, but other areas remain overgrown by trees and foliage, much as they must have been when it was rediscovered in the mid nineteenth century. 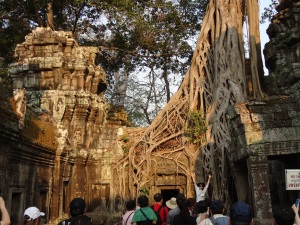 R warned us that we must stick together, as it is very easy to get lost in Ta Prohm, and he was quite right. Perhaps inspired by Jayavarman’s mom, among the delights of Ta Prohm, and the Bayon for that matter, are the many apsaras that decorate the buildings, one of which has even come to be known as the Hall of the Dancers. 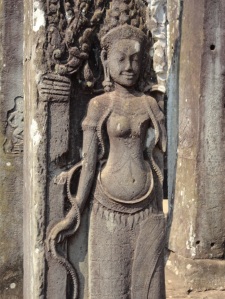 As we left we could see the moat and pond, now dry, that surrounded the complex. A couple of musical groups entertained the visitors at the entrance.

To close the day, we drove back to Angkor Wat to enjoy the sunset. Sitting on steps outside with my fellow tour members and many other people, enjoying some of the locally produced spirits, and surveying the vista of the temple by the light of the close of the day, was an excellent way to round off a beautiful day of temple viewing.

Fried rice cooked in the husk of a pineapple, served by a gorgeous young woman in the hotel restaurant, proved just a bit of a frustrating dinner. Several times she tried to engage me in conversation, but I was stymied by the thick accent of her English. She sure was beautiful, though, and very kind.