As today was largely a driving day, there won’t be a whole lot to report. But I’m sure I’ll make up for it over the next two days in Siem Reap. We said goodbye to our Phnom Penh guide T, and welcomed our guide for Siem Reap, R. He seems very nice, and has strong feelings – positive ones – about the state of Cambodian politics and society. It was nice to hear him point out that his country as well as Vietnam and Laos are tired of warfare and killing, and want to move on to a future of prosperity and self-determination. He also mentioned that the people increasingly reject one-family rule, nepotism, and corruption. None of that sounds so different from where Thailand is right now. I hope we’ll hear more from him on these subjects in the next few days, although I have a feeling we’re going to be in a more historical mode during that time.

We got to see several hours of the Cambodian countryside during our drive today – not perhaps as lush as we saw in Vietnam, but similar insofar as the land was mostly dedicated to crops and farming, with occasional, fairly small towns and villages. 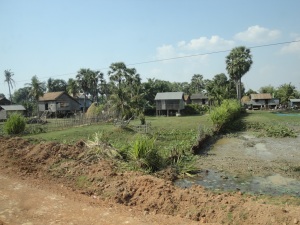 A stop we made that will likely be memorable for everyone involved was at a small village where some of the people are dedicated to capturing, selling, and cooking and eating tarantulas. Our host showed us how she finds them in small holes a few inches underground. She quickly defangs them – with a nail clipper! The tour members didn’t seem especially fearful, and a few had them crawling around on their arms and torsos. Later she showed us how she cooks them, killing them first with a little squeeze to the midsection, then frying them with some garlic in oil for a few minutes. 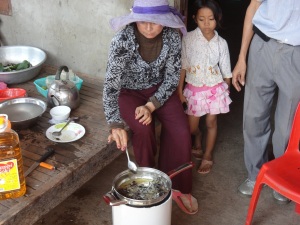 Verdicts on the taste were pretty positive; I contented myself with a photograph.

This little excursion was made especially delightful by the dozen or more kids that greeted us and followed us around. They were incredibly cute and unaffectedly friendly. I wish I could be as unreserved with people as they. I suppose all young people are great looking, but Cambodian kids, with their big smiles, do stand out. Much fun!

We had lunch a couple of hours later at a huge resort that may one day be a real tourist haven, but which today was sadly almost deserted. A nice place, though. After some more driving we got to the next stop of interest, the Kampong Kdei Bridge, one of several dozen built by King Jayavarman VII, or rather at his direction, as part of his massive building project of the late twelfth and early thirteenth centuries (also of course including Angkor Thom, Ta Prohm, Preah Khan, and the Bayon, which we’ll soon be visiting!) 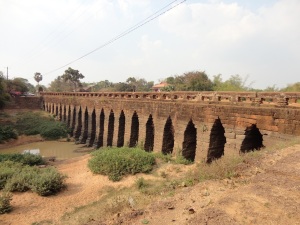 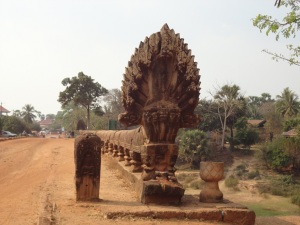 A couple more hours driving, and we arrived in Siem Reap – a city of 1.2 million, I was astonished to hear! They welcome over four million visitors each year. We stopped briefly at the Royal Residence, where I got to hear a few minutes of wonderful music, presumably Cambodian traditional and/or court music, at the nearby Buddhist temple. From there we made our way to the very comfortable Angkor Home Hotel that will be my home for the last few days of the trip.