We began a largely somber day with a slow, rough ride over in-the-process-of-construction roads to Choeung Ek, one of the largest of Pol Pot’s Killing Fields. T, our guide, detailed some of the complex machinations that led to the ascendancy of Pol Pot – the much-loved presidency of Norodom Sihanouk from 1955 to 1970, then the overthrow (with the support of the United States) of the King by his general Lon Nol in 1970, then the ousting of Lon Nol by the Khmer Rouge and Pol Pot in 1975. This began the three years, eight months, and twenty days of the Khmer Rouge’s reign of terror. At first their ascendancy and victory over Lon Nol and the Americans was greeted with joy by the people. But that lasted only a short time as Phnom Penh was soon evacuated, the people put to hard manual labor, and the intellectuals and dissidents systematically tortured and put to death.

Large open pits mark the Killing Field of Choeung Ek – although, quite disturbingly, one trods on bones and bits of clothing that continue to emerge from the dirt on the paths around the site. 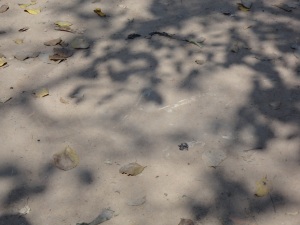 Piles of clothing and bones symbolize the bloodshed. Wristbands adorn the memorials, one of which is the killing tree where children were held by the legs and bashed to death. 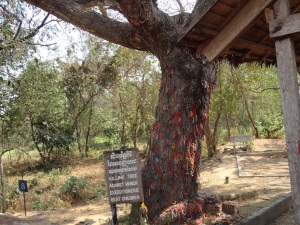 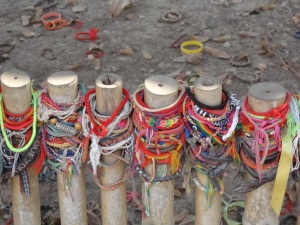 There seemed to have been no restraint in the behavior of Pol Pot’s minions, who were brutal and direct and bloodthirsty – and would have been put to death themselves if they weren’t. A large memorial building holds the bones of some of the 9,000 or so whose remains have been recovered at Choeung Ek – a tiny fraction of the two million that died at the hands of the Khmer Rouge in under four years.

One felt a bit of a ghoul even taking pictures at Choeung Ek. Than again, the whole point is to remember everything that happened, so as, with luck, to minimize the possibility of it happening again (although, looking at Syria and other places right now, lessons apparently haven’t yet been learned).

Next stop was the Tuol Sleng Genocide Museum, one of the centers of Pol Pot’s torture regime.

Most of the deaths happened at the many, many Killing Fields, but the systematic torture happened at “re-education” facilities like Tuol Sleng, then known as Security Prison 21, or S-21. We saw the very small rooms where the torture took place, the implements used, the small ammo containers that were used by the victims as toilets, many more bones, the grave sites of the last fourteen prisoners who were killed in the last moments of the facility’s use, and of course photographs of the torturers and the tortured. 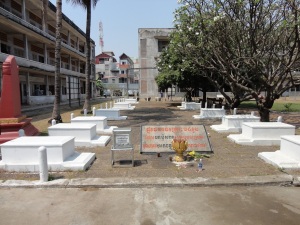 Two of the seven survivors of the facility, Chum Mey and Bou Meng, actually greet people there, talk freely about their experiences, and sell their memoirs. I bought both of their books, and was pleased to be photographed with both men. 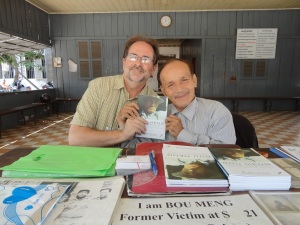 After lunch we went to the National Museum, home of some 5,000 artifacts from Cambodia’s history. There were small pieces and massive sculptures from before, during, and after the Angkor period. My only frustration, so often expressed during this trip, was that we spent too little time, barely forty minutes, there. I could have easily spent three or five times that looking at the art and reading the accompanying texts, but I suppose I am more of a museum hound than most.

We spent the same forty or so minutes at the Russian Market, or Psar Tuol Tom Poung, an enclosed, close, sweaty series of hundreds of stalls where one could buy everything from art to food to auto parts to clothing. It was all a bit much for me. While I still need to buy some gifts for folks back home, I’ll aim at getting them at Siem Reap, where we head tomorrow.