The day began in Luang Prabang with a tuk-tuk ride to the Royal Palace Museum, which had been built as the actual royal palace early in the twentieth century but which now serves as a museum. Particularly impressive was a room painted with a mural, covering all four walls, depicting life in Laotian villages when the building went up (not so different from life in those villages today, really). Another room was covered with impressive glass inlay, like the temple at Wat Xiang Thong. There were also a variety of relics, like the royal throne, musical instruments, and gifts from numerous heads of state. No photography was allowed inside the museum.

In the brief time before going to the airport, A and I walked over one of the bamboo bridges spanning the Khan River and took a brief look at the portion of Luang Prabang on the other side. It was much less touristy and more residential, but still calm and lovely like the rest of the city. Maybe that’s the quarter I’ll live in when I move here! A is very nice and curious like me, and our wander was pleasant. 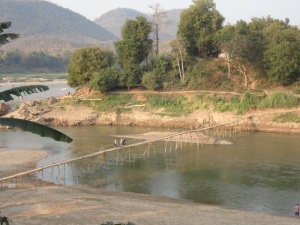 Then it was to the airport for the short flight to Vientiane, the capital city of Lao. The first impression is that it’s much, much larger than Luang Prabang – it has street lights, for instance! At least in our part of town, there are large, lovely temples every couple of blocks. 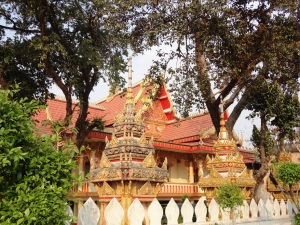 If there’s time tomorrow, I’ll investigate further. The hotel room is fine, although a bit efficient and not as nice as the first two in Bangkok and Luang Prabang. But it will certainly do, and it has fast, functional wi-fi!

One last little digression … It has occurred to me the last couple of days that I may be considering a “conversion,” or at least an embrace, of some form of Buddhism. In fact, I may have already to some extent. I would need to investigate further to find out what form suits me best. But the basic tenets of Buddhism, the fundamental dharma if you will, is something that I already live by, if not always consciously. Obviously Buddhist art and symbolism is of great fascination already. This thought just appeared in my head earlier today; for now I will just let it rattle around in my brain for a while.

After getting settled in our hotel, we took a two-mile or so walk around our section of Vientiane to get oriented. More of a “city” than Luang Prabang, there are a host of larger motels and stores and government buildings. In the side streets, though, it was like being in Luang Prabang again: little hole-in-the-wall restaurants, massage parlors, artisans, shops, and so on, perhaps a little nicer than Luang Prabang’s, but still attractively rough. Overall Vientiane feels diffuse, as though it were a dozen small towns in the general neighborhood of one another that decided to join forces and call itself a single city. At one point we went to the flood break of the Mekong River. Being the dry season, the river was quite a way off, giving a powerful impression of how much it swells during the rainy season. As we were walking through this part of King Anouvong Park, they were just getting set up for dance-aerobics that happen every night at the pavilion there.