The following is the first installment of the travel journal I kept during my tour of southeast Asia in February, supplemented by a few of the hundreds of photos I took. For the most part I’ll stick to the day-by-day chronology with which I kept the journal, headed by the day and time I was writing. One exception, however, is the first entry. As you’ll see, I ran into some trouble on the way to Bangkok to begin the trip. My original written account in the journal is pretty detailed, pretty defeated in tone, and, frankly, pretty boring. So my first two air travel days are summed up in a couple of paragraphs. Starting with Day 3, though, you’ll be reading almost exactly what I wrote at the time, so that you can essentially travel around vicariously with me. Also, with consideration given to internet privacy issues, I will allude to my fellow travelers simply with their first initials.

My goal is to put up two or three installments from the journal each week. Enjoy! 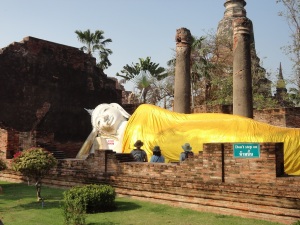 The original plan was to travel from Reno to Denver to Tokyo to Bangkok, all via United flights. That first Reno-Denver leg was no problem. The same goes for the first 98% of the Denver-Tokyo flight. However, Tokyo had had a surprise snowstorm the day previous to my traveling, and flights were cancelled or delayed left and right. After circling around Tokyo Narita airport for a couple of hours waiting for the backlog of flights to land, we were diverted to Tokyo’s other airport, Haneda, around 100 miles away. There we refueled, and sat around for a while. By the time we were allowed to fly back to Narita, my connecting flight to Bangkok was long gone.

So I had the fine experience of spending the night at Tokyo Narita airport. I guess it isn’t bad as airports go, but I wouldn’t recommend an overnight stay! First we hundreds of stranded travelers had to go through immigration, so that we could “enter” Japan and pass the time in a different part of the airport. Happily I heard from someone somewhere that there were some United agents on the airport’s fourth floor making new arrangements for people. Few knew about this, apparently, so I headed up and fairly quickly arranged for a flight to Bangkok via Thai Airways for the following afternoon. After attempting, mostly unsuccessfully, to get a few hours sleep on the airport’s floor, I got up and had some food at, yes, McDonald’s. Time passed, I had lunch with a couple of other temporarily stranded Americans, and eventually I got on the Thai Airways plane for what proved to be a very pleasant flight to Bangkok. Despite arriving late and not completing the customs and immigration process until about 1:30 a.m., the tour I was on had in fact provided transportation to the hotel. Hurrah! A quick goodbye was said to folks I had befriended, followed by a half-hour ride to the hotel, check in, and by 2:00 I was in my spacious hotel room – bigger, in fact, than my home – in Bangkok. However, the next day’s, or rather current day’s, visit to Ayutthaya was to begin at 7:30 that morning. Therefore, at 2:30 I bravely set the alarm for 6:30 and settled in for about 25% of the sleep I needed.

Fresh from about seven hours of decent sleep, I feel almost human again (although another full night of sleep wouldn’t hurt!)

Most of yesterday was spent on the Ayutthaya tour. I finally met R, our genial and very interesting guide, as well as most of the other tour participants. It will probably take me a few days to keep everyone straight and connect names, faces, and personalities. It must be said, though, that to a person everyone seems kind and engaging. I look forward to getting to know them better. One man, S, and his wife are apparently regular travelers, as they alluded to recent trips to Turkey, Morocco, South America, and Bali! I can completely see the advantage in spending one’s retirement touring the world.

Now for Ayutthaya … The nearly hour-long drive to get there never actually seemed to leave Bangkok. I was somehow under the impression that Ayutthaya was out in the middle of nowhere. But in fact the ruins are scattered about in the midst of a thriving city, much of it obviously tourism-based. The ancient city complex is huge, spread out over many square miles. One could spend days or weeks visiting all the ruins. We settled for just a few, particularly gorgeous and resonant.

The Kingdom of Ayutthaya, as opposed to the city of the same name, lasted from 1351 to 1767 and covered basically modern Thailand, then known as Siam (Ayutthaya means “invincible”). It became the major state of southeast Asia after the decline of the Khmer Empire, against which Ayutthaya fought. We got to see the huge gold-covered Buddha at Wat Phanen Choeng, nearly 700 years old. Assorted ruined stupas still were of a huge scale. Some were solid and intact. Others were built hollow and once held important relics; one could see several where the outer sandstone had been broken down to the underlying brick by robbers. Many of the Buddha figures were still in excellent shape, and were freshly adorned with golden robes.

At our first stop, a charming group of young students added to the fun, and seemed very interested in us, as we were in them. 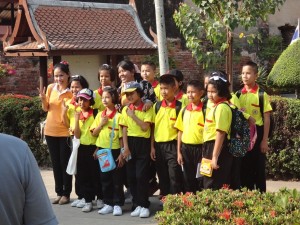 After lunch, we went to visit the much more recent Bang Pa-In Palace, the one-time official summer palace for Thailand’s kings, but now only occasionally used by the royal family. It was originally commissioned in the early seventeenth century, but was sacked by the Burmese around 1767 and deserted. Most of the elaborate buildings there now are of nineteenth century vintage, and are with just a couple of exceptions Western in style. Quite beautiful and a relaxing walk, but I rather prefer the ruins and more distant history. Probably the highlight for me was a beautiful building that had been given to Thailand by the Chinese Chamber of Commerce – originally built in China, it had been dismantled panel by panel and shipped to its current location, where it was rebuilt. 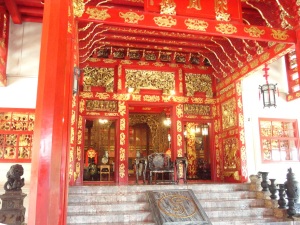 We got to the summer palace, by the way, by taking an hour-long ride in a “long tail” boat down one of the rivers that surrounds Ayutthaya. It was a good way to get a feel for the local community, even though there weren’t many cool old ruins to view. 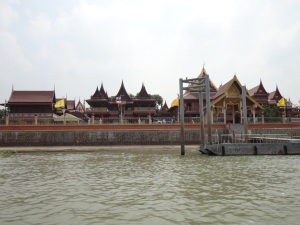 After this busy day, we returned to the hotel, where I ate a quick dinner and went to bed. I actually made it through pretty well, sleep-deprived as I was.