In looking through one of my notebooks a few days ago, I came across some notes I took at the exhibition Beyond Belief: 100 Years of the Spiritual in Modern Art, works from the collection of the San Francisco Museum of Modern Art presented at the Contemporary Jewish Museum. These bits and pieces don’t have any narrative thread, and I’ve just written plenty on this subject in my review of Roger Lipsey’s The Spiritual in Twentieth-Century Art. But I thought I’d preserve a few of these jottings here.

– “Like art, religion has been an attempt to find meaning and value in life, despite the suffering that flesh is heir to.” – Karen Armstrong
– Der Blaue Reiter, or The Blue Rider, was a group founded in 1911 by several artists, including Franz Marc and Wassily Kandinsky, that was dedicated to revealing spiritual truths in contemporary, often abstract, art.
– In his book On the Spiritual in Art, Kandinsky calls blue the color of spirituality – the darker the blue, the more it evokes one’s yearning for the eternal.
– Marc’s Gebirge (Mountains, 1911-12) hints at a path thru jagged mountains, leading at the end to bright sunshine. The spiritual metaphor is pretty obvious. 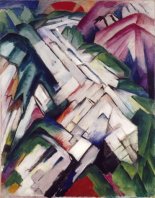 – Paul Klee was another member of the Der Blaue Reiter group. His etching Kleinwelt (Little Cosmos, 1914) is a miraculous little world just coming into being.

– Alfred Stieglitz’s Equivalent series of the 1920s and early 1930s, a series of photographs of cloud shapes, are among the earliest abstract photographs. 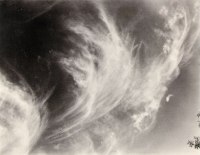 – In the book mentioned above, Roger Lipsey points out the resonances of calligraphy and Islamic art in Jackson Pollack’s work. But there is also a less rarefied, more earthy spirituality in some of his work, perhaps related to his interest in Native American spirituality. In Guardians of the Secret (1943), familiar from SFMOMA’s permanent collection, one can see a fascinating if inscrutable collection of symbolic associations – a dead boar, a chicken, tribal masks, guardian totem figures. 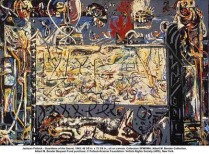 – Abstraction, among other things, provides a separation from the daily, visible world, with all its chaos and violence, and attempts to recapture a sense of the numinous through a regard for pure color, pure shape, pure form.