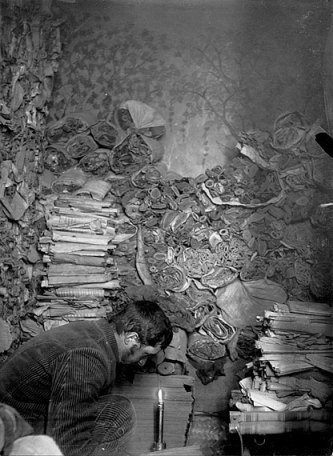 Paul Pelliot studying manuscripts by candlelight in the Library Cave at the Mogao Caves near Dunhuang, China. Photo taken 1908.

At first, I was going to post this photo by itself, with no commentary, simply because it’s so evocative – a lonely scholar sitting in a cave, examining mysterious piles of manuscripts by candlelight. But the story behind this photo is so interesting that I thought I would share some of it.

Dunhuang and its nearby Mogao Caves, the “Caves of a Thousand Buddhas,” comprise one of the world’s great artistic monuments. Named a UNESCO World Heritage Site in 1987, the Mogao Caves were occupied for around a thousand years, from the fourth to fourteenth centuries CE, and include hundreds of elaborately painted caves a 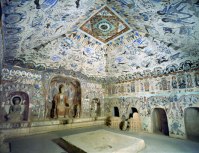 nd shrines. They were abandoned and largely forgotten until the early twentieth century.

Paul Pelliot (1878-1945) was the second Westerner to investigate the Mogao Caves. Pelliot, a famous French Sinologist, bibliographer, and explorer, was French military attaché in Beijing during World War I, and later served as a professor at the École française d’Extrême Orient in Hanoi and the Collège de France. He even received the Légion d’honneur for his bravery during the Boxer Rebellion. His thorough knowledge of his specialty – the history and languages of China and of south and central Asia – and impatience with what he saw as the slipshod work of other scholars led him to be dubbed “the Policeman of Sinology”

His 1906 expedition from Paris to China heading an archaeological mission took him through central Asia via the Trans-Caspian Railway, traveling through places like Samarkand and Tashkent and into northern China. Pelliot spoke fluent Chinese as well as about a dozen other languages, so communication was rarely a problem. At one point he heard about a cache of manuscripts that had been discovered near the old Silk Road oasis of Dunhuang. Arriving in March 1908, three months after Sir Marc Aurel Stein (1862-1943) had been there (Stein wrote about his visit in his 1912 book Ruins of Desert Cathay), Pelliot spent weeks going through literally thousands of ancient texts, art works, and other items at the Mogao Caves, which are located about fifteen miles southeast of Dunhuang. Most of the texts were stored in Cave No. 17, now known as the Library Cave, which had been walled up and forgotten since the eleventh century (why it was sealed up, no one knows). The texts were in Chinese, Tibetan, and other Central Asian languages, and dated from as early as the fourth and fifth centuries CE. Many of those texts were sold to Stein, Pelliot, and subsequent explorers by Wang Yuanlu (c.1849-1931), the Taoist monk that had rediscovered and long guarded the caves. Some of those manuscripts were later returned to China, but others became part of the collection at the British Museum, as well as a portion of the Collection Pelliot at the Musée Guimet in Paris. 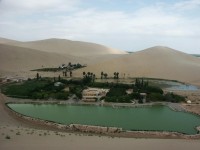 Dunhuang, a major stop on the Silk Road, was also known as Shazhuu, or “City of Sands.” The Dunhuang area was probably settled as early as 2000 BCE, and much later became a fortified frontier garrison town. The famous Great Wall passed near the city. Bordering on the desert, Dunhuang became a supply stop for caravans. Over the centuries the area was occupied by a variety of forces, from nomads to Tibetans to Uighurs and Mongols. In fact, the name Dunhuang translates as “blazing beacon,” referring to the beacons that would be lit when an invasion was imminent.

Buddhist monks first established themselves in the caves near Dunhuang around 350 CE. According to legend, a Buddhist monk named Le Zun had a dream there in 353 or 366 CE of a thousand Buddhas bathed in golden light, which led him to dig out the first of the caves. Over the next several centuries, monks started to gather there and dig out more caves, using them for meditation and retreat. They also served as a storage spot for thousands of manuscripts. Monasteries arose, and eventually the caves around Dunhuang became a place of pilgrimage. When sea-based transmission of goods started to dominate Chinese trade, the Silk Road was gradually abandoned, and Dunhuang and the caves went into decline.

Many Buddhist cave sites are located in that vicinity, the best-known of which are the Mogao Caves. Cut into the side of a cliff nearly two miles long, there were originally some 1,000 caves in the Mogao Caves complex. 735 still exist, including 487 on the southern part of the cliff (the painted ones) and 248 (mostly undecorated) on the northern part. Those southern caves were constructed and decorated as shrines, and were often elaborately painted floor to ceiling by the monks. Dating from the fifth to fourteenth centuries, the painted murals cover an amazing 485,000 square feet. Some 2,400 clay sculptures also survive. Built first on a wooden frame padded with reeds, the sculptures were then modeled in clay and painted.

Buddhas predominate in both painting and sculpture – hence the nickname “Caves of a Thousand Buddhas” – including illustrations from Buddha’s life story (the jataka tales). But there are also many representations of Avalokiteshvara and other Buddhist deities and historical figures. Occasionally the donors that funded the caves also appear. These paintings could be used as focuses for meditation, a

s instructional tools, and to tell stories. Patrons, clergymen and government leaders provided the funding for most of the caves.

Around the same time as Paul Pelliot was active, Sir Aurel Stein (1862–1943) made four archaeological expeditions to Central Asia (1900–01, 1906–08, 1913–16, and 1930–31). It was during the second of his expeditions that he visited Dunhuang for the first time. In Ruins of Desert Cathay, Aurel Stein described what he found when he first entered Cave No. 17, the Library Cave in which Pelliot is pictured: “Heaped up in layers, but without any order, there appeared in the dim light of the priest’s little lamp a solid mass of manuscript bundles rising to a height of nearly ten feet, and filling, as subsequent measurement showed, close on 500 cubic feet. The area left clear within the room was just sufficient for two people to stand in”

There may have been as many as 50,000 manuscripts sealed up in the Library Cave. Most of them were Buddhist texts, but there were Taoist, Confucian, and even Nestorian Christian works there as well, along with dictionaries, government documents, music scores, and other miscellany. Among them was the world’s earliest dated printed book, a Diamond Sutra from 868 CE created by woodblock printing (now housed at the British Library).

Stein and Pelliot inspired much interest in the West about Dunhuang. Only much later did the Chinese government take action to preserve the murals and manuscripts. Nowadays Dunhuang is a major tourist attraction. In fact, it has become so popular that there is some worry about the preservation of the paintings there. The International Dunhuang Project (IDP) is an international collaborative effort involving museums and other institutions to conserve and catalog all aspects of the Dunhuang caves. Thousands of the texts have been preserved digitally and are available online to scholars and others. There is also a traveling exhibition – “Dunhuang: Buddhist Art at the Gateway of the Silk Road” is currently on display at the China Institute Gallery in New York through July 21, 2013.

7 thoughts on “Paul Pelliot at Dunhuang”