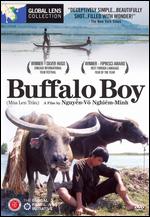 Buffalo Boy, Vietnam’s official entry for Best Foreign Language Film at the 2006 Academy Awards, is apparently writer-director Nguyen-Vo Nghiem-Minh’s only feature-length film to date (according to imdb he has a couple of other short films to his credit). Based on its quality, I certainly look forward to anything he might do in the future. Buffalo Boy tells the story of the coming-of-age of Kim (played by Le The Lu), the son of farmers who live and work in Vietnam’s southern Ca Mau Province. The family relies heavily on its two water buffalo. For much of the year their lowlands environment is inundated with water, so finding grazing land for their buffalo is essential. Such land is scarce and at a premium, and in the dog-eat-dog world of 1940s colonialism in which the film is set, leaders of buffalo drives can often be unscrupulous or even deadly.

Having just recently watched, for perhaps the fifth time, the Howard Hawks western Red River, at one point as I was watching Buffalo Boy I started mentally translating the film into a Western, replacing the usual cattle drive with one of buffalo, the denuded desert landscape of many westerns with the watery expanse of the southern part of Vietnam depicted here, and the typical characters of a Western with those I found in Buffalo Boy. The exercise was an interesting one, and highlighted the unusual, appealing ambiguity of Buffalo Boy. No one is entirely good or entirely evil here. Every major character seems to have at least one defining bad deed lurking in their past, but each is also capable of great benevolence. Even one of the characters we might have taken to be one of the “bad guys,” the buffalo driver Lap, has a secret that, once revealed, completely changes his standing in the film.

Water serves as a central metaphor throughout. Here water is the source of life and food and prosperity, but also the source of decay and death. As Kim says at one point, “Everything the water touches rots, and when the water recedes everything smells like mold.” You may well spend your life struggling against the very element that gives you life, causes your crops to grow, and your buffalo to be fed. Just as surely you will meet a watery end, and may well be sent to your final rest at the bottom of the ubiquitous waters, stones tied to your corpse to keep you under, only to have your remains rediscovered by future generations when the waters recede – which is exactly what happens at the beginning of this film, spurring the reminiscences that make up the narrative.

Nguyen-Vo Nghiem-Minh grew up in a small Vietnamese town, where he found escape from the trials and violence of everyday life in the town’s single movie theater. Ultimately he made his way to France and then the United States, receiving a doctorate in Applied Physics from UCLA. He spent several years doing research in optics before the switch to filmmaking. Made on a relative shoestring budget of under $1 million and using non-professional actors, Buffalo Boy tells its story elliptically, as a series of extended vignettes, perhaps reflecting the screenplay’s origin in a short story collection, “Scent of the Ca Mau Forest” by Son Nam. While colonialism does provide part of the context for the film, in the rural reaches of Vietnam depicted in this film, the political situation only occasionally intrudes itself. If the film’s gentle, refined, yet dissonant musical score by Ton That Tiet seems familiar, it is because he also provided the music for the brilliant first three features by Vietnamese director Tran Anh Hung: The Scent of Green Papaya, Cyclo, and Vertical Ray of the Sun.

One other element of the film that must be remarked on is the beauty of Vietnam. The characters that inhabit this film have all-too-few opportunities to enjoy the loveliness and mystery of their surroundings in the throes of their daily struggles. But thanks to the beautiful cinematography on display here, by Yves Cape, we filmgoers do get that pleasure.